Packing Only a Carry-On

Now, I will start off admitting that I have a problem with packing. It is supremely harder and harder every time I try to whittle down what it is I want to bring with me.
I challenged myself with my 10 day trip to Europe to only pack a carry-on bag (+ a backpack) with stuff I would need and it really was that, a challenge.

Packing what you want and what you need are both very different things.
Starting off, I threw everything I wanted to bring with me onto my bed... and yes, it was a mess.
Rolling up and squishing everything in my packing cubes was done, but it seemed like too much to me and a bit too heavy for a carry-on, so I thought and drew out things I figured I didn't actually need. 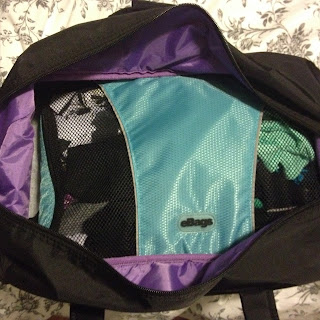 Here's a rough guess at what my packing list consisted of:

This of course will be edited and redone multiple times after this, but this is the roughest thought of what I wanted to pack. 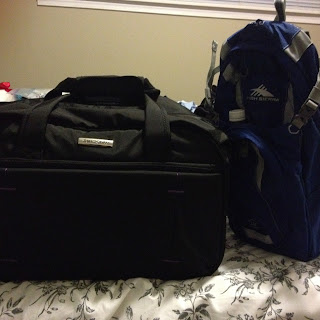 I can't begin to say how difficult it truly is when you have a tough time like I do to not pack a lot, but in the end, it's totally worth it. You can always buy things you need when you get to your destination and it's always a lot nicer to not have to lug so much stuff around.

The bag I'm using is a Samsonite Savor Wheeled Tote bag that you can find here.
My pack is a High Sierra 14L Hydration pack (that I took the water pack out of) that you can get here.
My packing cubes are from Ebags and they work awesome! You can get them on amazon in different sizes (here), I just got the medium ones.

Cheers and safe travels!
Posted by Elisabeth at 9:33 PM No comments:

Cinque Terre is one of those places that you go to and never want to leave. The five small towns that dot the coastline of the Liguria region of Italy are probably one of the most hidden, but favorited places to travel to.
If you've been looking for a place with swimming, not many or no tourists, and a relaxing lifestyle in a quaint town, you've found it. 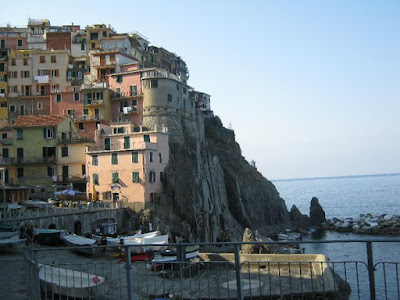 When I traveled here, we stayed in the city of Riomaggiore. This town was exactly what we needed to relax and then to have more adventures. 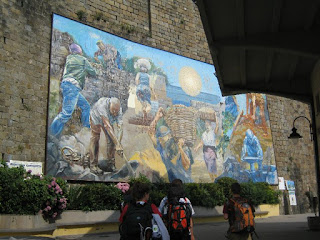 Since this is one of 5 towns within this Cinque Terre area, it was on the end of it, which meant we could get from one to the other pretty easily.
We spent one day hiking from here to the other end (through all these cities) of Vernazza, where we ended with swimming and a quick train ride back. 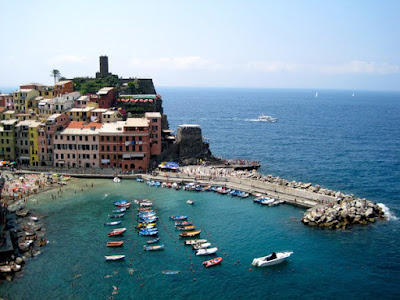 The next day we hiked the opposite direction, away from Vernazza and the rest, our end spot was Porto Venere, where we caught a boat ride back to where we were staying. 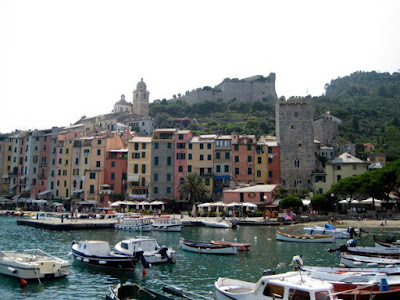 Both hikes were very manageable and fairly easy to do, although I would say to keep a buddy with you, because hiking alone can be a bit confusing. I did get lost on a couple occasions because I'm a slow hiker and got left behind. All in all though, I got back and there was no harm done.

The sites through the hike are gorgeous and worth taking your time anyways! I mean, it's Italy!
Hiking through some precariously placed vineyards, rocky outcroppings, and tree covered paths, it was a great experience. 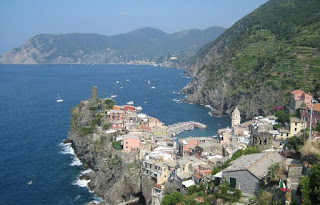 We also spent 4th of July here, which was fun in itself! In Riomaggiore, the central bar is actually run and owned by Americans (if I remember correctly) and they helped us to celebrate in style! Live music and lots of beer for the chaperones (no we were not allowed to drink on this trip, only sporadically in Belgium and France, with supervision). 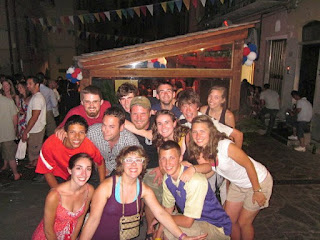 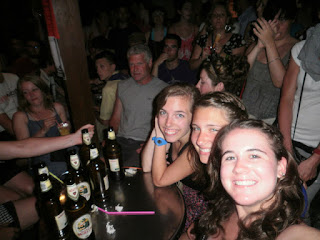 I think the best thing about staying here was our rented apartment. It was amazingly airy and we left the windows open a lot. So much space and a kitchen to make food! And the view wasn't half bad either, although we were not right next to the water, it was still awesome.
Although the 114 stairs up to it (yes we counted each stair) was a pain when you're tired. 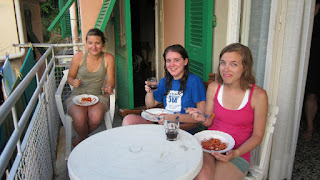 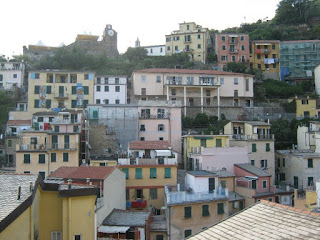 This is one of my favorite places I've ever been. Everything is just a little bit slower paced. It was relaxed and you got to go and do what you pleased.
The little market shop was perfect to buy food and then go home and cook it. You just can't really beat the small town feel when it has such a great atmosphere. 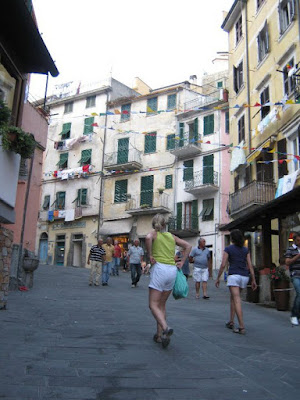 I would go back in a heartbeat.

Where is your favorite place that you have been?

Posted by Elisabeth at 10:00 AM No comments:

Tuscany! If you've ever been you know how beautiful it is and if you haven't you've heard of it. Sitting in a train going through the gorgeous country, wistfully daydreaming of wine and pleasantries with local Italians.

We had only been in Rome for about 8 hours before heading off to our set location of Siena, which we would be staying to see the Palio horse races for the duration of our stay. Our hostel was a little bit out of the city but the walk wasn't bad, despite the blisters I had on my feet (from the trip thus far) that would tell you differently.

Getting into the city was easy and we always had a way of going in through the same entrance, because the whole city center is walled off, we would go through the porcupine or Istrice gate. 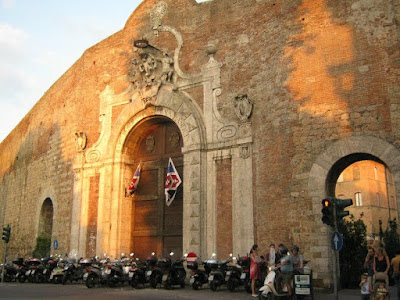 There are 17 different contrades of Siena, which represent different sectors of the city, only 10 of which compete in the Palio (which is a 3 day event).
Everyone from our group chose which contrade they would root for. I chose the wave or Onda, although I bought scarves of a couple different ones as well.

The race was help in the center of the city, in Il Campo, which is an amazing city center where they block everyone in the middle and tie ropes and bring in dirt for the horses and their jockeys to run on. 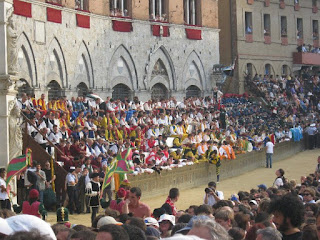 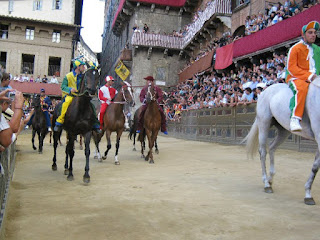 The have parades and sing, wave flags and such before the race starts every day and then they're off! I think the winner while we were there for the whole race was the forest contrade or Selva.
It was more than a site to see and to witness this amazing event I had never even heard of until signing up for this trip. 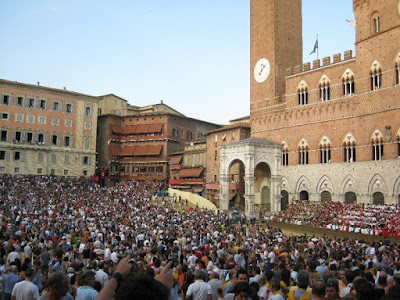 We definitely also had our bundle of crazies within the crowd as well. We had some Canadians next to our group who had been drinking a lot (and don't get me wrong, I love Canadians!) but they don't let you out of the center once the race starts, because you'd have to go across the track and one of the girls really had to pee.
So in her state of mind, she just peed right then and there, in the center, near enough to get it on some of our groups backpacks... It was pretty gross. Thankfully not my backpack but hey, our leaders took care of it and almost got into a fist fight with the guys in their group.
Lots of yelling, it was hot, and we didn't like our stuff getting peed on. So I get it!

Anyways, even with that little set back, we had a great time. We got to see the Siena Cathedral, Duomo, which was beautiful. My friend and I had to wear little disposable skirts to cover our legs, but it was well worth it. 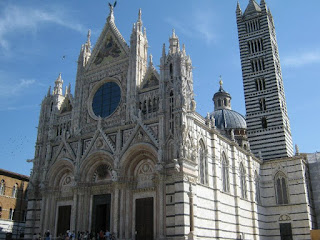 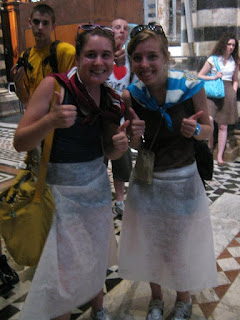 We also took a day trip to San Gimignano, which was awesome. Going up and getting a great view of their city from a tall lookout. Getting some of "The Worlds Greatest Gelato" which was pretty darn good (but I love gelato, so I'd like it anywhere).

I would definitely recommend a trip there if you've ever thought about it. There is a lot to see and do there, although be careful, it's easy to get turned around with all the twists and turns of the paths. There's also a lot of nice places to go in and use the restroom, without having to pay.
They also had great doner kebabs, which is one of my favorite easy fast food from Europe, so delicious!

On the way out of the city, we did make a quick stop in Pisa (which had my favorite doner kebabs of the trip!) and see the Leaning Tower. It was fun to sit and reflect and to see all the tourists "pushing" the tower in their pictures. 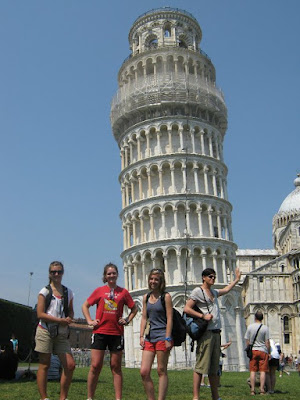 All in all, Italy has been one of my favorite places to travel to. The country is gorgeous, the people are mostly friendly and they have great food and places to see!

I will be writing about my favorite place in the world (so far) next week and hopefully making a post about how I pack my perfect carryon bag for my trip next week!

Posted by Elisabeth at 6:45 PM No comments: